Shortly after Mom passed over in 2006, Dad had us daughters and daughter-in-laws in the area, come over and go thru her clothing and her craft room to see if there was anything we wanted for us or the kids. We each took what we thought would be used.

In 2014 I was over at the house looking for something in particular a cousin had asked about. I went thinking maybe I would find the old family book and left with a few boxes of mom’s scrapbook stuff ~ saved over sixty some odd years to divide up between twelve kids and Dad ~ and we only went thru what was in the house, not the garage or, heaven forbid, the attic! 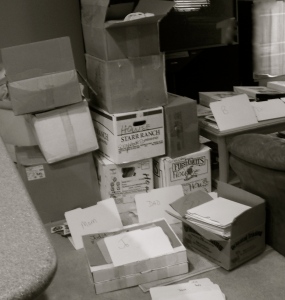 While spending hours a day for a couple weeks, we found lots of interesting objects:

The originals to the old family films. 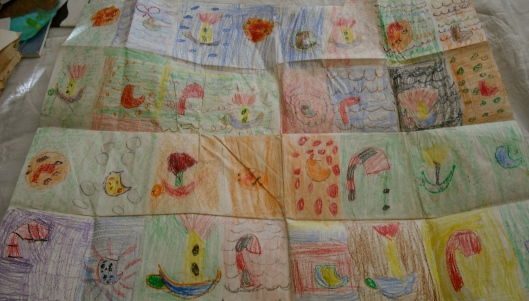 There were boxes of cards from well wishers, birthdays, every holiday imaginable and letters from her whole life.

A box of old church pamphlets and Family Home Evening manuals and other materials of Dad’s from his days as a Seventy.

My absolute favorite find was this wad of paper in an envelope written to the tooth fairy from a little boy. Yes, that is his bloody tooth!

One box held something very different and very much older than the rest.

Folded up for the past one hundred and almost fifty years, was this disintegrating newspaper, mostly turning to dust as we picked it up to open and see why it had been saved.

Here, was a history of the death of President Abraham Lincoln.

Views of the very same microfilmed or even this scanned version cannot give you the emotional feelings of holding something that had evidently been held by mourning family ancestors. But in honor of Presidents day today, I shall attempt to put the scanned version here.

Going through family memorabilia is a daunting task, but there are little blessings along the way.