Writing about my parents is hard because there are so many stories to tell.

Joanne and Arnold were sixteen and seventeen when they got married on the Eighteenth of September in the year 1959, in the First Presbyterian Church in Harbor Springs, Michigan.

We have her written record of things but this is my memory of how it was told  to me.

Joanne’s family moved to Lake Street when she was young and their neighbor was a little old lady named Mrs. Howse. 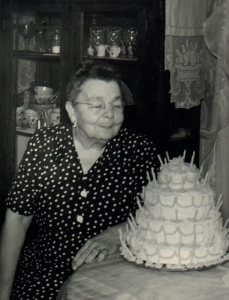 Joanne liked to visit with her from time to time, look at her photographs and listen to her stories of her family.

Mrs. Howse often spoke lovingly of her son Clifford and his children. She spoke to Joanne of Cliff’s only boy, Arnold, who played the trumpet.

Joanne knew this boy because they lived in a small village, went to the same church, and went to school together. Arnold was a year and a day older than Joanne, so he was a grade older. This didn’t really sway her toward him as she wasn’t interested in boys at the time.

There was something that had just always been in Joanne’s head since she was old enough to think about it: she knew without a doubt her husband would have black hair.

(I suspect because her father had black hair and she adored him.)

Both Arnold and Joanne absolutely loved being in the High School band and enjoyed playing music with a passion. Sometimes there was even a bit of jealousy on Joanne’s part because Arnold played First Trumpet and tended to get more attention from everyone. Joanne played excellent piano but in band she played whatever the teacher needed, mostly she loved the “bari sax”.

One day they were staying after school and decided to play tag. All was fun and games until someone touched Joanne from behind. She knew whoever had touched her would someday be her husband. She turned around and it was the dark haired trumpet player. She was about fourteen at the time.

Soon things were arranged so they spent time going to movies, driving around town, going to Harbor Rams games and dances together.

Arnold graduated from Harbor Springs High and was headed to College when they decided to get married.

“They lived happily ever after. The end.”

P.S. there was something about him having dimples and long lashes too.