Guest post by Bethany Anne Howse Downey
As our father’s earthly stay was coming to an end, many of my siblings gathered together in his home. We were given permission to take home any family items we desired. I didn’t want to take anything home, however, I was given a few objects that had been in a shadow box of our parents.

END_OF_DOCUMENT_TOKEN_TO_BE_REPLACED 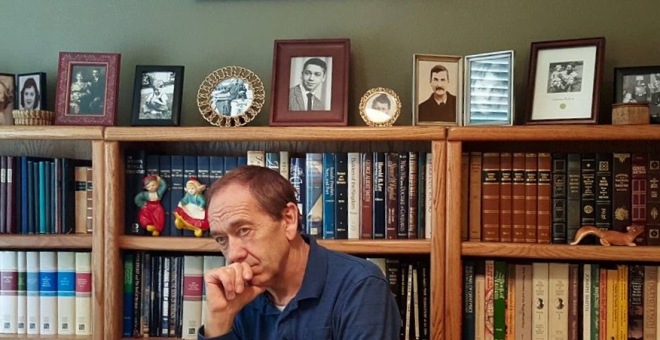 a distant memory flowed past

accompanied by the ever so slight wisp of a smell

not needed for my college classes

but something deeper inside called

purchases made and headed to the dorm

looking through the pages

putting stylus to ink and then to paper

how easily the beauty and the letters appeared

how sweet the flow

one could get lost in this

then life took over 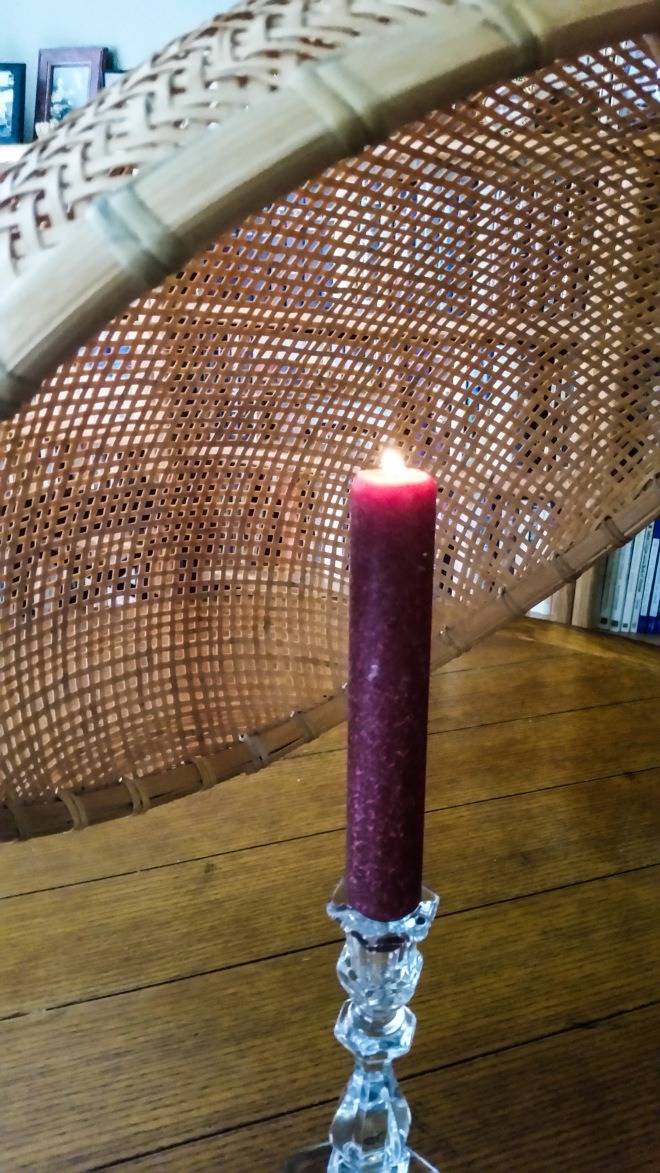 and the candle light

but for just a small moment

in the early morning light

My sister and I headed north on I-15 from Salt Lake City and drove on into Idaho a bit until we saw the sign to Lava Hot Springs and took a right, heading on past the springs, we next took a left on Lund Road and drove on into the gold and green town of Bancroft. 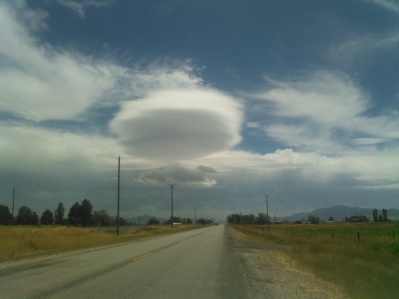 END_OF_DOCUMENT_TOKEN_TO_BE_REPLACED

Whyte Eagle out doing what he loved best, having fun with the beautiful Maria, after sliding down a hill, trying not to miss a chance to see something unusual. 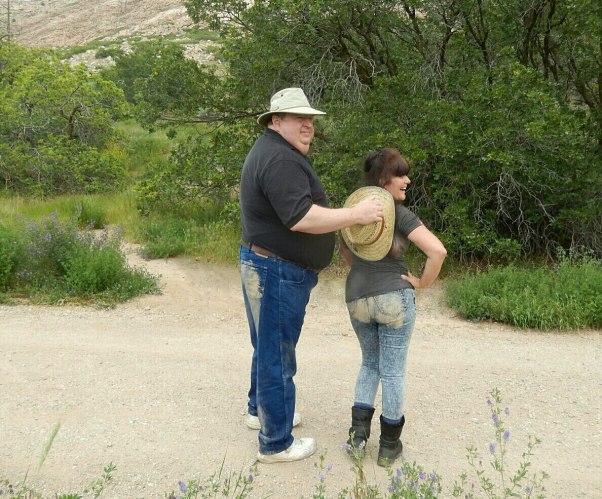 For many years I would head out alone or with my kids or a few friends for adventure to see what was out in this amazing world.

I ran into a couple forums on the internet and read the words of these rugged individuals. END_OF_DOCUMENT_TOKEN_TO_BE_REPLACED

On the first leg of our last adventure, we found some time to visit the Colorado Mystery Glyphs as we headed East. 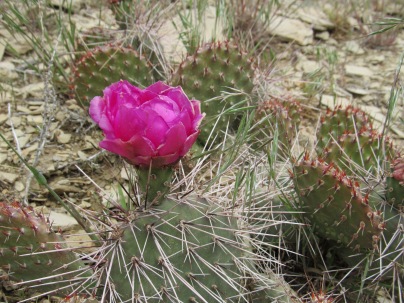 A few misadventures with a lost checkbook set us off later than intended, but Stephen and I met up with Terry, Utahna and Kayla in Spanish Fork Canyon and were soon on our way.

END_OF_DOCUMENT_TOKEN_TO_BE_REPLACED 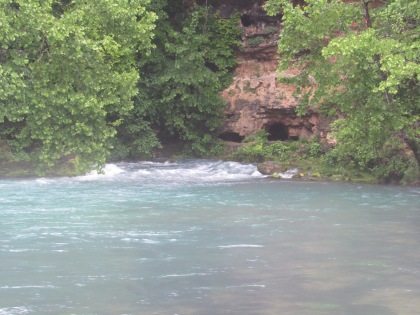 Each and every day we seek balance in our lives.

On our trip home to Utah from the Zarahemla Archaeological dig in Iowa, we made a few stops along the way to see, perhaps, some places known from old.

We left the group in Montrose and headed off. We reached an old stone fort in Illinois just at dusk, that story I will tell another time. We then drove on to Van Buren, Missouri to see the Big Spring and arrived about a little after midnight, May 16, 2015.

As we pulled into the state park we were greeted by possums and deer and a lot of fog.

They only car we saw in the park was a silver suv over at the boat ramp, other than that, we had the camping area to ourselves.

Sleeping in the car was uncomfortable for all of us.

A light drizzle and fog greeted us all night until about 4 am when I felt something was wrong and I tried to wake myself fully to see what it was. There were some lights and then a downpour of drenching water came, I looked at the time and it was 4:30 am. We moved the car closer to a lit up outhouse and I got out to wander around.

Soon it was light enough and I wanted to head over to the Spring to see it in the early dawn.

We drove over and parked the car at the most beautiful, fairylike place I have ever visited.

Pictures do not do justice to this foggy morning beauty. 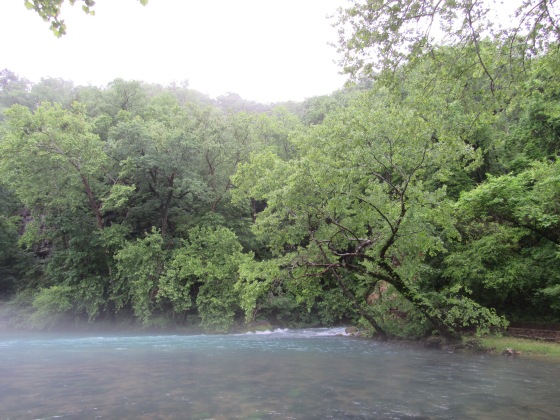 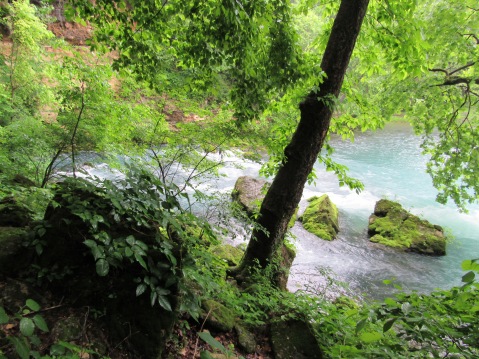 We started to take photos.

As I headed down the sidewalk toward the spring, I was hit by a wall of emotion so strong I wanted to cry. I figured that it was because it really was the place of antiquity some believe it to be.

As I walked a bit further, my eyes were drawn to this scene on a park bench, close to the spring. 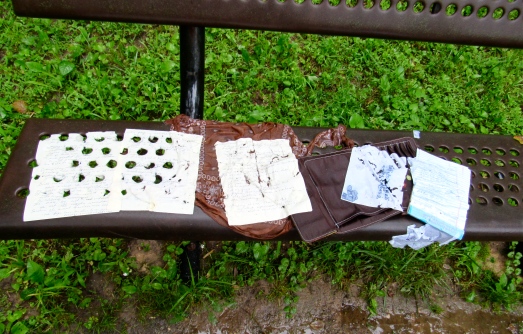 It looked as if someone had purposefully placed these items, almost for a photo.
Left to blow in the wind and rain.

I called to Utahna to come take a look. 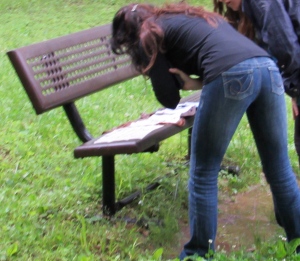 We tried to read it and after a few minutes of talk it was decided to call 911.

Only Kayla had reception on her phone in these deep woods of Missouri.

A deputy soon arrived and glanced at the papers and said he couldn’t read it. He took a name and number in case he needed us later and gathered up the wet mess into a bag and was about to leave when Steve asked him to look around up the steps and in the woods and cave. He went a ways and returned and told me he was going to drive along the river and look and he left.

Three Park Rangers showed up and we repeated what we had seen and Steve tried to show them pictures from the camera. They asked Steve and I to write down our deposition.

We called the others back to the car after we took a few more photo’s and tried to get a calm peaceful view of the park.

We went to find a restroom and while walking back to the car noticed a bridge over to the parking lot for the boat ramp. I recognized that the silver SUV was still there, plus a couple black trucks, one with a trailor. We decided to take a walk over ~ just because.

Utahna walked over to the passenger side and looked in from afar. She noticed the back window on the drivers side had it’s glass broken all over.

I looked from my side and sure enough – broken glass on the ground.

We hurried over the bridge and into the awaiting car and told Steve to hurry over to the Rangers so we could report it.

The young Ranger listened to us through the car window and kept repeating as before.

This is REALLY a nice PEACEFUL park.

They all got in their Ranger trucks and drove over to see the vehicles.

They noticed that the front mirror was hit and the side scraped. This doesn’t show up in my picture though.

They saw the Georgia plates and thought they knew the owner- someone who takes people up and down the river. They would get in contact with him, the other two trucks that had arrived were also from Georgia, so he probably was waiting for them to arrive for a float down the Current River.

Someone must have backed into the car or swiped it from the side. Since the glass was both inside and outside in a pile it was probably hit there.

This time Utahna and Kayla gave their deposition including the silver suv.

The two rangers that were left allowed us to take their photo after a little coaxing.

They obviously love this park. 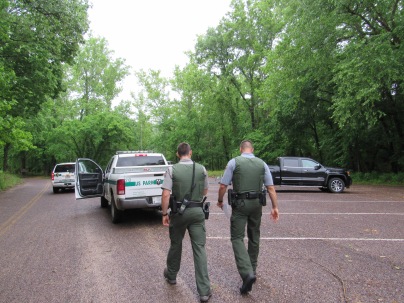 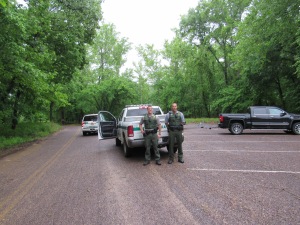 We went and lingered on the bridge just down from the Big Spring for a few more moments and then headed out to Utah once more.

The rangers had given us a number to call to check if anything came of this weirdness.

Utahna contacted the office and a nice lady told them they couldn’t read anything so the case was closed as no other evidence showed up.

The first 3 papers (pages numbered 2 and 5 at the top) are thoughts on life, the paper they were written on was nice and heavy, not quite parchment paper, which the downpour an hour before had punched holes through, like the bench itself, on the first two pieces. The third paper (page number 3) was laid over a brown and white kerchief, so it fared a bit better in the reading arena, although even the first two with holes was amazingly clear to read.

Next was a brown cloth case, opened, with a smaller note on cheap notebook paper. On it was a hand drawn astrological chart in ink with a small drawing and a larger doodle.

On the rightside was a notepad, left upsidedown, the top page had received the worst damage from the weather and so nothing could be seen of it but the twisted remains. the top paper one could see was a list, by times of things to do. Things to buy, people to contact etc.

We didn’t touch anything, just took photo’s, the Deputy was the only one to pick them up, at which point they easily disintegrated into a mess.

Who left this message on the bench?

Did they run to the car and leave their papers behind?

Why are they all laid out as if someone ought to look down and read them?

As there is nothing more to be done with this mystery, we decided to put it here in our memories.

We all got close ups of the papers but I will not post them here.

If you perchance are the one who left them behind, know that we did what we could to find you.

Safety in the Fall
Blog at WordPress.com.