Guest post by Bethany Anne Howse Downey
As our father’s earthly stay was coming to an end, many of my siblings gathered together in his home. We were given permission to take home any family items we desired. I didn’t want to take anything home, however, I was given a few objects that had been in a shadow box of our parents.

A cropped photo from the second shadow box it was in.
One of the items was a beautiful Victorian silver slide necklace with an engraved golden locket. 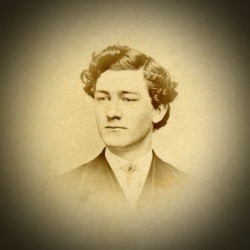 Inside the locket was a picture of our 5th great grandfather, Roderick Kinsey Andrus (Born 1845).
I knew the necklace had been given to our mother by our Aunt Gladys, but the paper with the previous owner’s name which had originally been included, was nowhere to be found.
That night, the necklace made its way to my home and was tucked away for a few weeks. One day I wanted to take a closer look at the locket and decided it needed cleaning. Out came the Q-­tips and metal cleaner.
The picture of grandpa Andrus had been stuck in the locket with masking tape and was now terribly discolored. I took it out and discarded it (not an original picture). 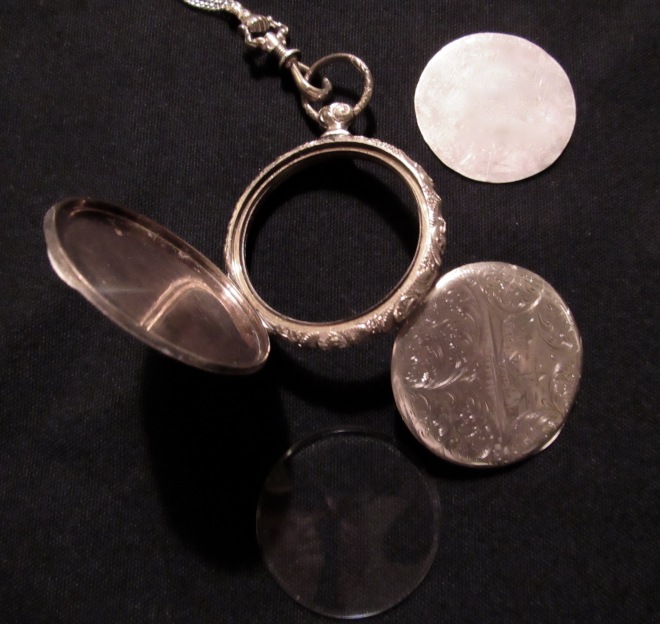 I noticed the locket opened from the front and back. Inside was a round glass covering and a round metal backing.
With some trepidation, I began to swab the outside of the locket. It brightened immediately and I could better see the intricate engravings on both sides.

On the front is a quaint country scene one might imagine somewhere in Europe. There is a tower standing behind a few homes with lit windows (perhaps meant to be at dusk?) and a small body of water in the foreground.

The back side again had the swirling winds all around the edges (as if from the 4 quarters of the earth?). In the center is an image that resembles a crest or shield. So many details to notice, enjoy and speculate about!
With the inside and outside of the locket cleaned and shiny, I took out the glass piece and metal backing. Why not clean the metal piece too even though it looked very worn and corroded.

What transpired next was both magical and eerie!
Swabbing from left to right, the image of a woman came into view and was looking straight at me!!! I couldn’t believe my eyes… I was seeing something nobody in my family had seen, not even our mother. It was a real tin-­type, but who was the woman? 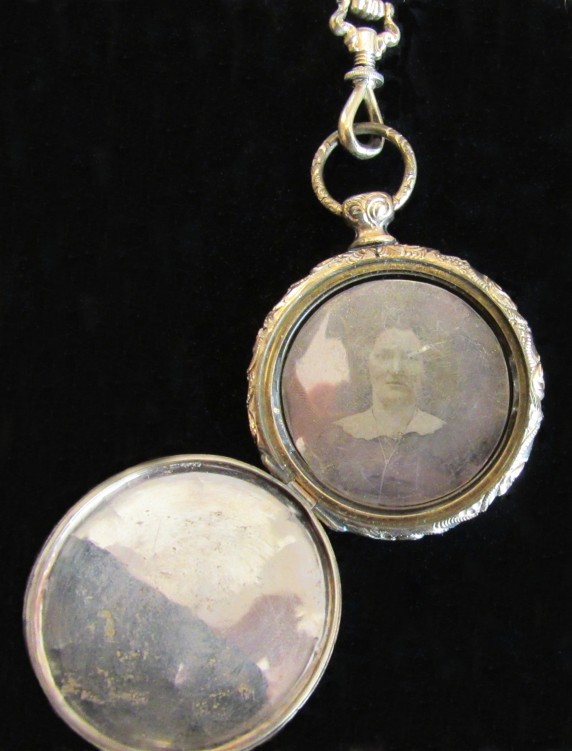 Of course she was a relative, but who?
Her hair was dark, parted in the middle, pulled back with finger curls on both sides.
I looked for family resemblances… I sure couldn’t place the face.
I put on my reading glasses and it was then I could see this woman was wearing the same necklace I held in my hands!!

I sent a quick picture of the lady to my sister, Darby, to see if she recognized her. She said she had never seen her before, but I said she had, but at a different age.

It was logical that she was from the Andrus side as it had Rodney’s picture in it. Could it be Roderick’s wife, Katherine Leinweber?
With her keen eye, Darby quickly and correctly identified the mystery woman…it was Roderick’s mother, Elizabeth Boughton Andrus (Whitman) (Born 1823 in NY). What a find!!

The question still remains as to by whom the necklace was given … her husband, Enos C Andrus (Born 1821 in NY), her parents or someone else.
We will probably never know, but are grateful for this wondrous, additional, younger picture of our grandmother.

Editor’s Note:  Note the variations in color due to lighting conditions. The locket itself is gold and the chain is silver.

Editor’s Note:  This is the grape slide on the  Victorian chain.

Editor’s Note:  The locket itself resembles a classic Victorian Mourning Locket. Elizabeth looks to be in her mid twenties, so the picture would have been taken in the late 1840s or early 1850s.