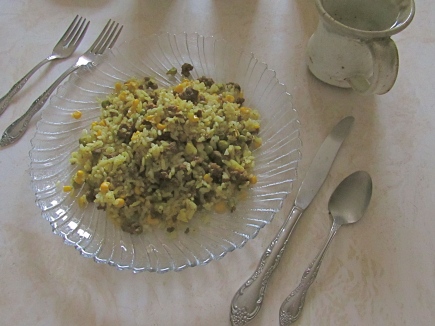 Si was “off track” from school this past week and brought me over a loaf of banana bread in which he had hand ground the wheat (twice) and made the whole thing by himself.

He spent time here as he usually does off track ~ he likes being spoiled by grandma.

On his last day we went to the grocery store and I asked him on the drive over, “What would you like for dinner if you could have anything in the world tonight.” I wanted to thank him for the warm bread he had brought for us.

Too much for his overactive brain to give him choices.

I finally told him it was ok, he didn’t have to choose his favorite, because even though he might have a favorite food (or 10), he might not want to have them right now. I don’t eat steak for breakfast, just because we like steak. I reserve that for candlelight dinners.

He thought about that for a minute and then he answered.

Okayyyyy. What is it?

The laughter went on perhaps longer than it should have.

Your Dad named my recipe???

One day, long ago, in a time where cupboards were getting bare. A time where, instead of healthy fresh fruit and veggies, our food storage was where I turned for food.

At that time, we had Minute Rice, several of the extra Large boxes and shelves of canned goods from Aldi’s. In the freezer was one pound of frozen hamburger.

a few dashes of salt, pepper

My son called as we were preparing this comfort food and so we questioned him what “truc” meant. We explained the situation and he said,

“Oh, it means something like, thingie or stuff, so Rice Thingie or Rice Stuff. And that sounds good, if you have enough I will come by with Gid and have some with you!”

My son-in-law says this is Not a real recipe. I beg to differ, it even has a name now!

We had some left over, so I reheated this comfort food for lunch today. If you are feeling cold or nostagic for the past, stop on by for some Rice Truc!