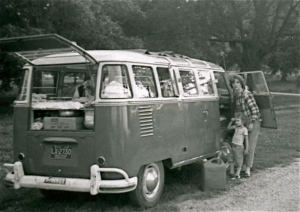 August 1964 a little girl was playing with tiny stones, gravel really, but in her head these tiny beads of various shades of grey rock were just perfect for putting through the small hole in the metal that was attached to the door of a Volkswagen Bus.

A three and a half year old is fascinated by simple things.

I see the the pebbles in my fingers even now.

Some adult thought we needed sweaters I believe and so a young ten year old was asked to get them out of the van for us. Being a dutiful young aunt she did what she was asked, never guessing I was playing down there.

She closed the door and my finger was in the wrong place.

Soon Grandparents and parents guided me into Grandpas car and we drove around the bay to Little Traverse Hospital in Petoskey, where everyone piled into the emergency room to be greeted by Nurses who assured everyone that little fingers bleed a lot but it isn’t anything to get upset about.

I can hear the nurse telling me to take the yellow soap bar and wash my hand off. Which I did. And it burned. Next I heard her say, “Oh Dear, It really is only attached by a string of flesh!”

I don’t know what happened next, but when I awoke I had this nice bandaged finger and they offered me a grape sucker for my problems.

The Doctor, I was told later, had sewed the tip back on but felt certain it would turn black and have to be taken off shortly, that if it did stay on and grow, I would have no feeling whatsoever in the tip and certainly no fingernail.

My Father had recently joined the LDS Church and had been given the Priesthood, so he gave me a Blessing and in it, he told me my finger would be made whole and I would regain my feelings in it. My dad was 23 at the time. He wasn’t a man who was full of himself. He was just a young kid himself and new to the whole idea of listening to the Spirit and being a voice for God.

My finger stayed on, my nail grew strong, if not a little bit crooked and the feeling is all there.

Today that little girl still likes to play with stones and gems and all different colors of crystals and she tries hard to keep her fingers where they will be safe.

That little one in the picture is standing by the rock garden only a few feet from where she lost her fingertip.

Miracles happen every day thanks to good doctors, family and God.

One thought on “stones would play inside her head”